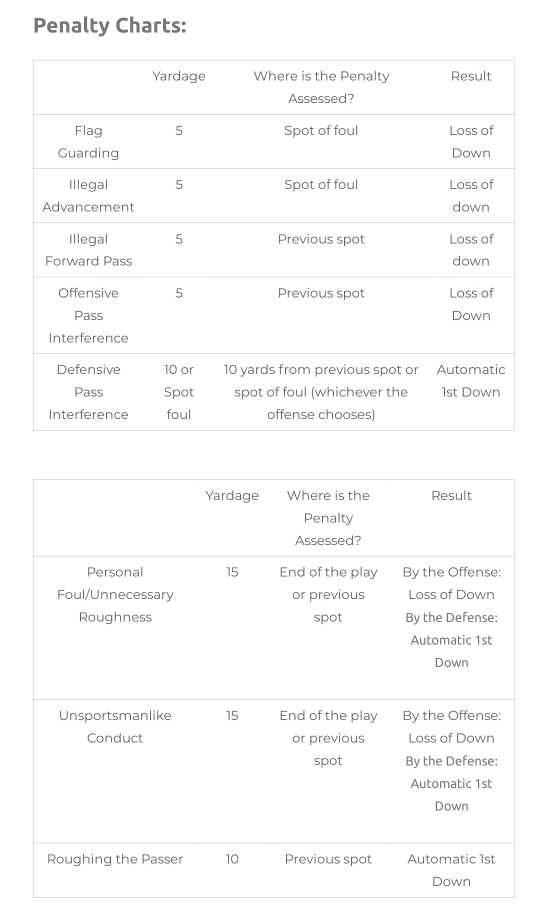 Minimum of 3 players to start a game.

A coin toss determines 1st possession. The team can elect to have offense, defense, defer or direction. Choice in the 2nd half will be awarded to the team that did not have the choice 1st half.

Teams also must have the same color shirts and have an alternative color (one dark color/one light color). They do not have to be official uniforms. If both teams are wearing the same color, there will be a coin toss, and the losing team will need to change into a different color.

Each team has two 30 second timeouts PER GAME. If a time out is called after a TD the clock will not run until the change of possession and the offense snaps their ball.

The clock will run continuously during the 12 minutes of the first half unless a team timeout is used or play is stopped by an official (e.g. deal with an injury, challenge, referee conference, game management purposes, etc.)

The clock will run during point-after-touchdown attempts (PATs) in the first half�unless�the defense opts to use a team timeout.

In the second half the clock will run continuously for the first 11 minutes unless a team timeout or an official?s time out is used.

The one-minute warning will stop the clock in the second half.

The head official will give a verbal two-minute (for rule specific changes) and one-minute warning as close as possible to the actual marks but will not interrupt a live play.

At the one minute warning officials will use a ?PRO/CLOCK? mechanic for the remainder of the contest.

The time remaining on the clock will be announced after every play inside the final two minutes of the contest.

The quarterback may not run unless the ball has been thrown back, handed or pitched to him or her in the backfield.

Teams may handoff (unlimited), pitch, or throw back in the backfield.�UNLIMITED laterals or throwbacks behind the LOS are allowed for the player to remain eligible to pass.�The player who receives the pitch or handoff may throw the ball as long as he or she is not fully beyond the line of scrimmage.

Pitching (backwards/laterally) is allowed downfield (unlimited). Handoffs are allowed in front or behind.�

A forward pass DOES NOT have to cross the LOS to be a legal play.

If the ball is placed on the ?Back? of ANY player, the player MUST run the ball (no give and go to the QB on the back)

Ball is spotted where the ball is at the time of the flag pull. The ball must break the plane of the midfield or goal line to be considered a first down or touchdown.�

Players may NOT block down field in any form.

The quarterback has 5 seconds to pass the ball if there is no rush. If the ball is not thrown, then the play is dead. After the ball is ruled dead it is returned to the line of scrimmage.

Once the ball is handed off or pitched backwards the 5 second count stops. If the defensive team rushes, then there is no 5 second count.

There is no arm in motion, if the ball is in hand when the quarterback?s flag is pulled then it will be ruled a sack.

Interceptions may be returned.

The rusher may not have any contact with the QB (no hitting the QB arm or knocking the ball out of the QB hand).

All players are eligible to receive a pass, including the quarterback, if the ball has been pitched or handed off in the backfield.

Players must have at least one foot in bounds when making catch.

Players that run out of bounds during a play cannot be the first player to touch a ball when attempting to make a catch (this is a penalty Illegal touching). If the player is pushed out of bounds by a defender, then comes back into the play, he or she is still eligible to touch the ball first.

Play is Ruled Dead When

The offensive player?s flag is pulled.

Ball carrier steps out of bounds.

A touchdown is scored.

Any part of the body that is not hands or feet touches the ground. ?

Players that rush the quarterback must be a minimum of 7 yards from the line of scrimmage when the ball is snapped.

The 7 yards will be measured off by a referee.

Players that are not 7 yards from the line of scrimmage when the ball is snapped may not enter into the backfield until there is a change of possession.

The rusher is allowed a direct lane to the quarterback as long as he or she rushes from either side of the center or outside the bunch formation. The offense must avoid interfering with the rusher if he or she has established a lane.

Contacting receivers is not allowed

A player may ?find? their opponent by reaching out and placing a hand on them as long as touching does not delay, impede, twist, or turn their opponent.� This is not considered pass interference.

A player�may�use their arms or hands to intentionally obstruct the receiver?s view (face guarding) of the ball without turning their own head to play the ball as long as noteworthy contact is not made with the receiver.

If defensive pass interference occurs in the end zone the ball will be placed on the one-yard line, automatic first down.

Interceptions may be returned.

Interceptions in the end zone that are not returned to the field of play will result in a touchback and the ball will be spotted on the 5-yard line.

Contact away from the direction of the pass is not considered pass interference but may be considered illegal contact.

Whether a pass is catchable or uncatchable has�no bearing�on pass interference. The benefit of the doubt is given to the receiver.

Examples of pass interference include:

Shoving or pushing off to create separation.

Playing through the back.

Hook and turn: grabbing the torso and turning an opponent before the pass arrives.

Arm bars, hooking, restricting, grabbing wrists, or turning a receiver.� � � Blocking downfield before the ball has been touched, commonly seen through ?pick plays?.

Following a touchdown, once the scoring team has informed an official of which point conversion choice they want to attempt the decision cannot be changed unless the scoring team�uses a team timeout.

If a penalty occurs during an extra point attempt, the penalty will be assessed but the extra point value remains the same.

Decisions cannot be changed after a penalty. For example, if the offense attempts a 1-point PAT and is penalized five yards for a false start, they cannot change their mind and go for a 2-point PAT. They will still be attempting a 1-point try even if they call a timeout.

Dead ball fouls committed by the offense that do not carry a loss-of-down penalty (false start) may result in penalty yardage assessed and the down replayed.

Fouls by the offense during a successful PAT attempt that carry a loss-of-down penalty (flag guarding, illegal advancement, illegal forward pass, etc.) will result in the PAT being no good.

Fouls committed by the offense in unsuccessful PAT attempts will be declined by the defense and the PAT will be ?no good? and will not be replayed.

Fouls by the defense during an unsuccessful PAT attempt will result in a retry after the options are administered.

Teams can elect to go for 1 or 2 points

Winner will be determined once the value of the extra point exceeds the other teams attempt.

PENALTIES
PENALTY CHANGES for inside 2 minutes of BOTH halves.

Intentional delay of game by the offense or defense, any team member, or fan will result in a 15 yard unsportsmanlike conduct penalty

automatic 1st�down (if committed by the defense)

LOD (if committed by the offense) and the clock will stop. 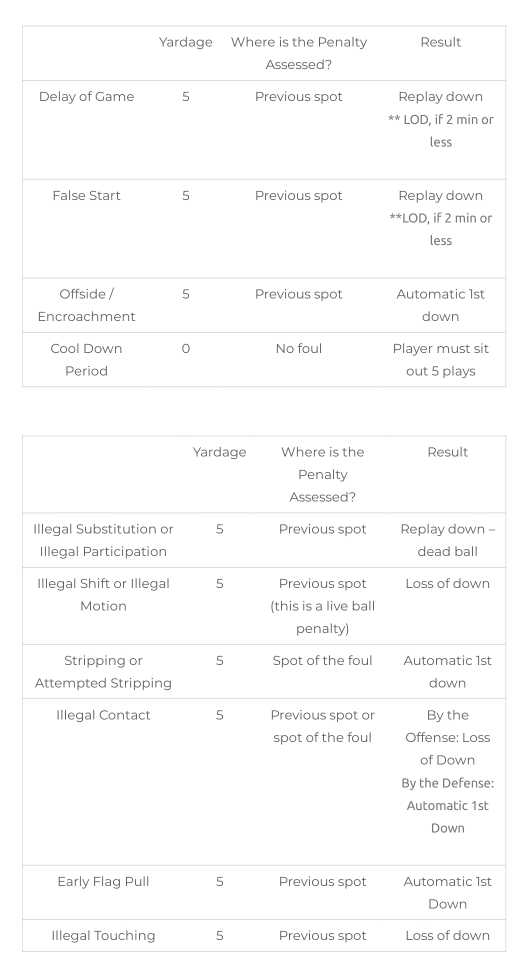 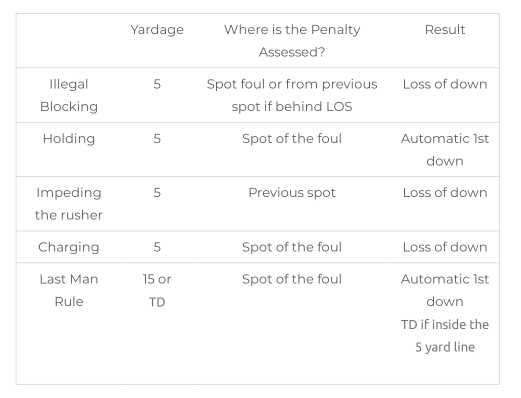