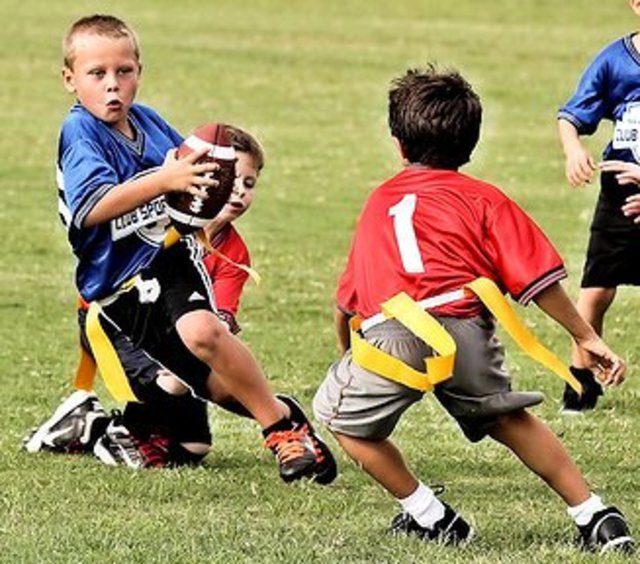 Many parents have concerns about letting their kids play Football. Is Flag safer than Tackle? Nancy Justus of the
The Gazette takes a look at the question!
National Flag Football, NFL Flag, Hard Count Athletics, USA Football and numerous other organizations are working to make the game safer and to get more kids back into the game.

Let’s take another look at the flag versus tackle football issue with a couple of questions.

Are injuries, in particular head injuries, the reason behind fewer numbers of participants in the game?

Are tackle football injuries that prevalent in younger ages?

There isn’t any agreement between the experts.

Flag football, obviously, offers a less stressful option for parents whose kids want to play despite the possible long-term or immediate affects. An Aspen Institute Sports & Society Program Analysis on flag football noted a youth flag league in Florida has served more than 7,000 kindergarten through middle school-aged children since 2014. It’s now sponsored by Under Armor. Participants in the seven-on-seven league use tackle plays, concepts and terminology without tackling, still learning the fundamentals of the game.

In Mobile, Ala., the goal of an NFL flag league is to give families an alternative route until the kids are teenagers.

“Short of combat sports (boxing, karate, etc.), there is no other mainstream sport where you can go as a little boy up against another little boy and pretend like you’re a man and try to beat them,” Domonique Foxworth, a writer at The Undefeated and a former NFL cornerback, said in the Aspen report. “When you’re 5 or 6 years old and you see movies that are about men being strong and tough, and you see ads about the military ... the idea that you can go to school in your football jersey and that separates you from all the other kids ... who are just a little bit softer than you — it’s all part of your thought process.”

One major problem with young kids playing a game they might look at as macho is most youth football coaches are undertrained and are volunteers. According to the Sports and Fitness Industry Association, coaches trained in CPR and basic first aid dropped from 55.9 percent in 2012 to 51.5 percent in 2017, concussion management from 43.6 to 38.8 percent, general safety and injury prevention from 53.1 to 43.4 percent, physical conditioning from 52.4 to 44.9 percent, and sports skills and tactics from 46.7 to 43.3 percent.

The only area of improvement over that span was in effective motivational techniques, which improved from 32.6 to 34.6 percent.

Aspen’s analysis regarding the effects of youth participation in flag football versus tackle football is, “We suspect most would adapt to flag and the game would prosper, just as hockey did after it introduced its body-checking ban. Since 2012, the number of children playing hockey on a regular basis is up 56 percent, more than any other team sport.

“More importantly, prioritizing flag before high school holds the prospect of inviting into the game many potential participants who otherwise are inclined to steer clear of football due to injury concerns.

“USA Football currently takes the position that flag and tackle are both good, at all ages. It has no plans to recommend a minimum age to transition from the former to the latter ...”

Dr. Robert Cantu, co-founder of the CTE Center at Boston University, said in the report, “I’m not talking about abolishing football. I want more people to play football. I just want youngsters at highest risk not to be getting their head hit 200 times over the course of an average season ...”

States and individual programs are trying to alleviate injuries in the game. Changes in the rules of California youth football were signed into law July 31. It limits the amount of full-contact practices in an effort to lower brain injuries in youth football.

Conduct no more than two full-contact practices per week during the preseason and regular season.

Conduct no full-contact practice during the offseason.

Have coaches receive a tackling and blocking certification.